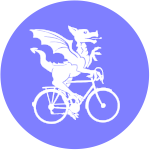 The fine art of saying hello

A few months ago I joined a small group of cyclists on a day’s training organised by the South Downs National Park Authority, at the end of which we officially became the first batch of ‘South Downs Cycling Ambassadors‘. Slightly to our disappointment, this turns out not to involve lavish embassy receptions or stacks of Ferrero Rocher, though I did come away with a very colourful Ambassador’s cycling jersey and, of course, a greater appreciation of the many natural wonders of the National Park.

One of the things the national park team was anxious to tell us about was their new ‘Share the Path’ initiative, a campaign to encourage folk in the Park to exchange a friendly greeting with other they meet. As Ambassadors, we were invited to take this up. Little did we know this campaign would soon be ridiculed in the national press. 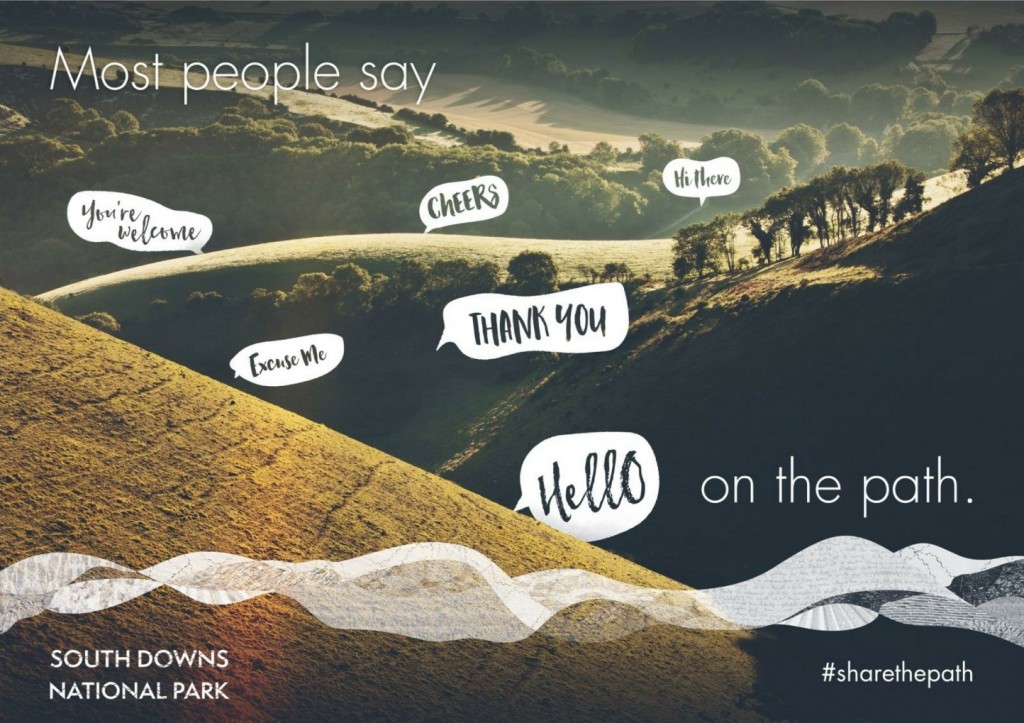 Now, although it’s true that some of the campaign’s posters are a bit odd (why are all those people SHOUTING at each other all the way across the valley?) the authority did have a point. The South Downs National Park may only have 112,000 people living in it, but 10 million live within an hour’s drive of its boundaries. (Yes, I got those factoids on the Ambassador training course, how did you guess?) On some weekends the most popular paths (especially the South Downs Way) can get fairly busy. It’s easy to get grumpy about other people when you’re out on a country path: the hikers think the cyclists go too fast, the cyclists think the horse-riders churn every path into mud, the horse-riders think the dog-walkers should keep their dogs under better control, and so on. It’s harder to stay in a bad mood with someone when you meet them face-to-face and they they greet you with a cheery ‘Hello!’

Besides, people talking to each other is a Good Thing in general. There’s even a study that suggests greeting passers-by – or even just nodding to them – is good for everyone’s health and wellbeing.

So, as a South Downs Cycling Ambassador, I do my bit. Whenever I’m out cycling on the many trails and lanes of the National Park, I try to greet everyone I meet.* The question is, what to say?

Generally speaking I go for a simple ‘Hi’ or ‘Morning!’. I suppose in Wales I could try ‘Bore da!’ but I’m running the risk that the other person is an English speaker who will think it’s a Welsh insult. Sometimes just a wave or even a nod will do.

There’s a perennial debate in cycling circles about greetings on the road. Some believe that a cyclist should always greet any other cyclist they pass and who moan about miserable roadie types in chaingangs who ignore any greeting. I can understand this to an extent: if I were riding at 25mph, six inches from the rider in front, over potholed roads, I wouldn’t want to break concentration even for an instant. Me, I dream of a world where cyclists are so commonplace that you couldn’t possibly greet them all – it would be like flashing your car headlights at every car you pass.

In France, cycling clubs exchange the cheerful cry, ‘Salut!’ as they pass each other, which is a lovely word. It’s got a nice round sound to it: sa-loooo (add as many oooo‘s as you like). We should all adopt that. The campaign for ‘Salut!’ starts here. Expect it to feature in the safety talk on next year’s Beano tours.

As all good rural cyclists know, if you’re passing a horse and rider you should say hello to the horse, not the rider, as your voice helps the horse understand that you are a human being and not some scary hybrid creature with a human head and metal wheels. On one recent ride, one of my fellow cyclists said “Good morning” as we passed a horse rider. When the rider answered “Good morning” back, my companion snapped, “I was talking to your horse, not you!” which put a bit of a downer on the encounter. I expect my friend was just upset that the horse snubbed him.

On cyclepaths I often find myself behind a group of walkers. Lacking a bell** I usually call a hello in plenty of time as I approach. In return I often get an indignant “You should have a bell!” which seems odd to me. Surely a warm human greeting is better than the peremptory “Ding” of a bell?

I’m assured by a farmer’s son that farmers all over Britain (and possibly Europe) have a universal language in which they  communicate, so if you meet a farmer on the trail, just say “Arp.” (This translates roughly as “Greetings, good sir! What a fine crop of barley you have!”) He will answer either “Arp” (“Yes indeed, thank you for your kind words; however I am concerned that the weather will turn inclement before I am able to complete the harvest”) or “Ah oh” (“Get off my land before I take a shotgun to you”). You should react accordingly.

The other problem is: when do you stop? As you ride into town, the number of passers-by goes steadily up. At some point you look like a babbling idiot if you keep saying hello to everybody, but what is that point? Somebody should do some research.

For now I’ll continue to do my best to smile and greet anyone I meet out on the lanes and bridleways. If you’re out riding this weekend, I hope you’ll do the same. Maybe we’ll meet.

Until then, remember… Salut!

* Obviously this only applies while I’m inside the South Downs National Park boundary. Don’t try to greet me in any other national park – you’ll just get a sullen silence or a muttered “Sod off”. If the New Forest or Snowdonia want me to be nice to people, they’ll have to come up with a free cycle jersey too.

In which Andy discusses what a vegetable can teach us about the English landscape. Oh, and there’s a recipe.​

I started writing this blog post some months ago as a light-hearted tribute to the coffee stop, then put it aside to come back to

The city beneath the lake

Llangasty Retreat House – the base for our Brecon Beacons Beano – sits near the shores of Llangorse Lake, the largest natural lake in South Wales. 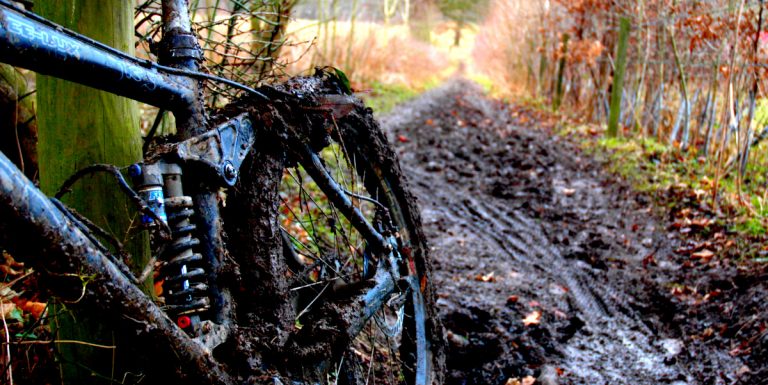 I’ve been out on my mountain bike recently. To those of you who know me well, that may come as a bit of a surprise.

The fine art of saying hello

A few months ago I joined a small group of cyclists on a day’s training organised by the South Downs National Park Authority, at the end

Cycling on the edge of the day

In which Andy plays tag with a barn owl I nearly didn’t go for a ride on Sunday. We’d been out for the day and

If you would like to receive regular email newsletters from Bicycle Beano, please fill in the form below.

The newsletters will contain stuff about Bicycle Beano holidays and occasionally other bits we think you might be interested in. There will be no more than one newsletter a month – unless there’s something we’re so excited about we really, really can’t wait to tell you. You can unsubscribe at any time. We will not share your details with anyone else. 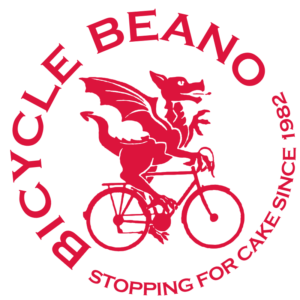